Three Strikes and You’re Out!

Strike One – Refined Sugar Is A Toxin!
Once thought to merely be a harmless source of empty calories, study after study has confirmed what naturalists have known for hundreds of years, sugar is indeed dangerous! Consuming refined sugar (sucrose) or foods that contain high levels of readily available sugars, spells trouble for the cells, tissues and organs of your body.

Indeed, this highly processed substance has now been , inextricably linked to a wide range of diseases from diabetes to dementia and a host of others in between.

At CHC we recommend that everyone, adults and children alike, make a concerted effort to eliminate white sugar and other high glycemic index foods from their diet. Need more convincing? Then read on.

The Addictive Nature Of Sugar

Strike Two – Sugar Is Very Addictive!
When we eat sugar, a chain of events is set into motion that results in the biochemical and hormonal changes associated with addiction. In fact, the chemistry is nearly identical to that which occurs in heroin, alcohol and cocaine addiction. Yet despite the truth of these statements, and the science to back them up, sugar consumption worldwide continues to increase.

As of 2019, the population of planet Earth consumes roughly 171,000,000 tons of sugar per year. This deadly statistic is heralded by the sugar manufacturing industry, which describes this as a “healthy growth” in consumption. Clearly there is a huge division in opinions concerning the facts about sugar.

Strike Three – Sugar Is An Abusive Bully!
White sugar has gone through a process in which it has been stripped of fiber, enzymes, vitamins, minerals and nutrients. This spells trouble since these substances are necessary for the proper assimilation of sugar in the human digestive system. Unfortunately, since the sugar is now missing these necessary nutrients and it cannot be properly digested without them, it attempts to rob the body to get back what it needs.

The missing components are seldom available, and even if they were, the human body is not designed to re-create something that can only be formed in nature. The end result is cellular depletion and high blood glucose levels.

From the gut, a rush of sugar enters the bloodstream raising blood glucose levels dramatically and causing harmful insulin, pancreas, liver and adrenal reactions. Hyperinsulinism, insulin resistance, metabolic syndrome and diabetes are just a few of the conditions associated with white sugar consumption. White sugar has also been shown to contribute to overall cellular inflammation as well as having a detrimental effect on the immune and central nervous systems.

In my mind a clever way to sell what’s left over after whole-grain (wheat, barley, millet, buckwheat, einkorn, corn, rice, oat, rye, etc.) has been processed, white flour is one of the most readily available non-foods on the face of the planet.

All of the valuable nutrients are removed by smashing, stripping, crushing and otherwise abusing whole grains.  White flour, or any resulting shade thereof, is born from the death of the whole grain.

Nutrients and components that are needed for breakdown by the human digestive system, originally present in the food such as, oils, vitamins, minerals and bran are removed.  The resulting by-product, white flour, is what’s left.

In the body it is digested so poorly that a heavy, slimy, sticky residue is deposited in the intestine causing a myriad of problems.  Not being one to foster outlandish claims or use fear tactics, ponder this.  White flour has been known to cause intestinal blockage and subsequent death when fed to farm animals.

100% Whole Grain Flour Might Not Be What You Think It Is!

In the overall category of over-processed flour, it is important to be careful of products that claim to be 100% whole grain. See if you can find the errors in thinking in the following information from the Whole Grains Council?

“Following is the official definition of whole grains, approved and endorsed by the Whole Grains Council in May 2004:

Whole grains or foods made from them contain all the essential parts and naturally-occurring nutrients of the entire grain seed in their original proportions. If the grain has been processed (e.g., cracked, crushed, rolled, extruded, and/or cooked), the food product should deliver the same rich balance of nutrients that are found in the original grain seed.

This definition means that 100% of the original kernel – all of the bran, germ, and endosperm – must be present to qualify as a whole grain.”

At first glance this definition seems quite reasonable and should by all accounts render a very healthy and edible food. However, there is a serious problem here if you break apart what’s actually being said.  First of all, “… essential parts and naturally occurring nutrients of the entire grain seed…” are only safe, useful and digestible in the human body if they are consumed in a form that is similar to that which occurs in nature. Once grains have been smashed, stripped, crushed, and otherwise brutalized, they are no longer in the proper form to be efficiently and safely assimilated by the human digestive tract. This would be similar to smashing your wristwatch into bits and pieces and then expecting it to function like the original timepiece. After all, the “essential parts and naturally occurring” molecules would still be there, so why not? Good luck with that endeavor!

Furthermore, the wording from this definition, “cracked, crushed, rolled, extruded, and/or cooked… The food should deliver the same rich balance of nutrients that are found in the original grain seed.” constitutes what amounts to an absurd and ridiculous statement. There is no should about it! The correct grammar here would read … can’t deliver…., not should deliver. Because unless a grain has been gently and caringly prepared by stone grinding or some similar method, it will have been altered in a way that renders it partially indigestible and ultimately harmful to the human digestive tract.

This kind of thinking represents a segmented non-holistic view of nature. Can we haphazardly mess with what nature provides and still be able to look our stomachs squarely in the eye? You be the judge.

Processed flours have been shown to enter the human bloodstream so quickly that the rise in blood sugar mimics that which occurs from the ingestion of refined white sugar and grain alcohol. To make matters worse, the same biochemical addictive cycle that is seen when white sugar is ingested is also present in response to eating grains. 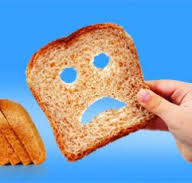 So what do you consume and in what form should you get your flour?

It might seem, from what I have just said that 100% stone ground whole-grain flours would be completely acceptable. And they might be, if you could trust the purity of the grain, the integrity of the entities processing the grain and the honesty used in the labeling of the grains or flours you have purchased.

A major problem is that the processing of grains worldwide has become industrialized and commercialized. This has resulted in the growing and harvesting of poor quality grains that are automatically over processed and sold to the public in a fraudulent and deceptive manner. Did you know that it is legal in the United States to label a flour as 100% whole grain, even when 40% of the product is actually white flour. This makes for great profits, but unfortunately results in substandard and potentially dangerous grain products. Another “trick of the trade” is to first roller grind a grain to a fine white powder. Next, some of the lighter byproducts are blown off with fans. Finally, a portion of the blown off bran, germ and other components, are mixed back into the white flour and renamed 100% whole grain flour. Of course, what isn’t remixed will be sold as white flour alone.

A number of leading nutrition experts, in this country and around the world are now recommending that people simply stop eating all grains. They believe that hybridization and genetic modification of once nourishing grains, coupled with current mass production methods, have rendered the world’s readily available supply of grain flours, inedible. That’s right, they are recommending that people stop eating commercially produced grains altogether.

There is, however, a movement afoot involving an increasing number of people who are growing and/or buying what are known as Ancient Grains in order to make their own flour.

Wheat flour in any form, regardless of the degree to which it has been processed, is of particular concern. Recent studies have clearly shown that the proteins, including gluten, contained in modern wheat have the potential to trigger inflammatory autoimmune reactions in the vast majority of the population. Therefore, we at Cherubino Health Center are cautioning our patients about the potential hazards associated with wheat consumption. 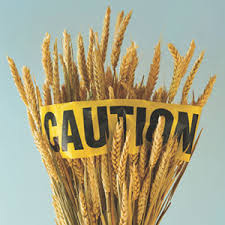 Finally, regardless of any decisions that you make based on this information, it is difficult to defend the continued consumption of white flour, whether it’s made from wheat or any other grain. The fact is that white flour is always harmful.

Therefore, with that thought in mind, and since I always believe in looking for the positive, I leave you with this simple fact; White flour makes great wallpaper paste, school paste, Play Doh® and paper mache! And this might be a good thought to keep in mind the next time you reach for that donut, cracker, or other white flour or over processed darker flour product!!

Pasteurization was developed as an emergency method to stop the spread of disease.  Contaminated milk from infected, diseased animals was heated in order to kill live disease causing bacteria.  Along with the destruction of these harmful bacteria, live enzymes, vital to the proper breakdown of the milk in the human digestive system, were also destroyed.
Pasteurization increases the shelf life of milk and is believed by many to have become a wholesale opportunity for the dairy industry to sell less than acceptable milk.
There are many in the health care field who feel that humans should not drink milk past the time of weaning.  I have heard it said that milk, in its raw and chemically correct form for humans is naturally available during the time in their lives when it is necessary.
I will simply say that only milk in its raw unheated state, from a healthy disease-free animal, should be considered for human consumption.  Pasteurized milk is a nonliving, mucous forming and obstructive substance.
Again, since I believe in always looking for the positive, I leave you with this simple fact; Were it not for pasteurization and its denaturing effect on the proteins found in milk, one of the greatest discoveries of the 20th-century would never have been possible, I speak of course of Elmer’s Glue.  Bottoms up!! 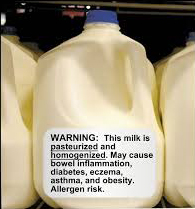 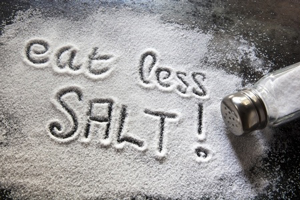 Sodium is an essential mineral.  It is found in abundance and in beneficial form (covalent bond) in fruits and vegetables.  However, like our sugar, flour and vegetable oils, most salt is highly refined. This includes sodium chloride (table salt), processed sea salt, monosodium glutamate, sodium saccharin, and baking soda as well as many other salt compounds.
Heating and refining salt causes beneficial covalent bonds to become ionic bonds. This ionic form of sodium is harmful and should be avoided, and ideally, not eaten at all.  Arteriosclerosis, high blood pressure, pulmonary edema and excess mucous formation, are but a few of the diseases linked to inorganic salt intake.
Unheated and unprocessed sea salt is the only type of salt that should be consumed. It comes from various regions around the world and offers many benefits to the human body.